In this real hypnosis session we feature the beautiful Jayne, who was returning for her fifth hypnosis session. Since I’ve worked her so many times before, it was no problem getting her into a deep trance. It was a great shoot and one of my best yet. Not only does it have a ton of content, but Jayne’s reactions are always something to see.

There are a number of freeze scenes and animal transformations (and if you haven’t seen any of Jayne’s animal transformations, they are definitely some of the best I’ve ever filmed), a lot of eye-rolls which I hadn’t seen too much in her other shoots, a great scene involving some mouth play, where she doesn’t notice her mouth becoming numb while continuing to talk, and a lengthy scene where I regress her age whenever she sucks on her thumb. I also explore submission and pleasure through hypnosis near the end of the shoot.

There is no nudity in this shoot, though she does change half way through the shoot into a short dress. Her bare feet are visible through most of the shoot as well. I was trying a new mic for this shoot and unfortunately there’s a bit of white noise on the audio, but the model is always easy to hear. 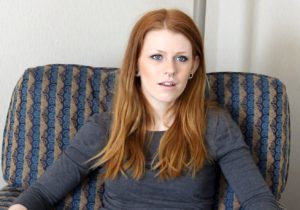