In this hypnosis session Jayne returns for our Christmas Special! It’s our first ever Christmas themed hypnosis experience, where we explore all the seasonal suggestions and requests we could fit in, along with some great costumes and props, providing one of our favorite sessions to date.

Since we’ve worked with Jayne a few times before, she was a great subject once again, allowing us to fit a lot of content into this Special. Following a full hypnotic induction, she becomes frozen like a statue whenever she hears a special trigger word. She drops into an instant sleep whenever she is hit with stuffed toy snowballs. She responds to a TV remote as if it were programmed for her. She thinks and acts like a number of different animals including a penguin and a reindeer (with a bright red nose).She becomes one of Santa’s elves, and also becomes a zombie elf, left repeating the few Christmas words she remembers. She experiences age regression while opening a few Christmas presents. In one of our more outrageous suggestions yet Jayne draws on her face with a lipstick while her hand is being controlled by the hypnotist. This is only to highlight a few suggestions from a long list of memorable moments. Read below for the full list of suggestions.

Technical note: This is the first session where we used a new lapel mic, allowing better audio during quiet dialogue. 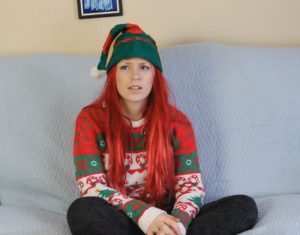 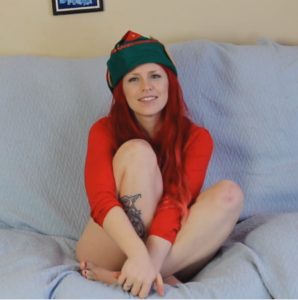