In this hypnosis session we feature a brand new volunteer in Rachel. She was very skeptical about hypnosis having failed to enter trance in the past by a stage hypnotist, but she ended up being easily the best subject I’ve worked with yet. She was extremely suggestible, and took to all the suggestions given to her perfectly. This shoot comes highly recommended. This is also one of my longer shoots, with most suggestions being reused at least a few times.

Highlights include a number of animal transformations that are easily the best I’ve filmed so far, with her completely believing she is is both a puppy and chicken. When she would return to her normal state on the ground, she had no memory of her time as these animals, thinking I had her doing exercises on the floor. There was also some great freeze scenes, some fun mouth play scenes, and a great scene where she tries to resist the pocket watch but cannot, involving some good natural eye rolling. She is wearing stockings through the shoot, and her feet in stockings are visible through the later half of the shoot as well. 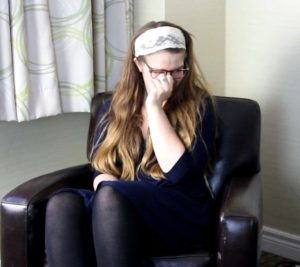