In this hypnosis session we feature the popular Sophie, who was returning for her second visit. As we quickly discovered in her first visit, she is a natural when it comes to hypnosis, and managed to go even deeper in her return. Since I didn’t have to spend as much time working with her while under, there is a great deal of content in this hypnosis session, possibly the most I’ve managed to fit into one visit. The suggestions used are also quite different from the last session, a few being used for the first time. This is one of our best videos yet and comes highly recommended along with her first visit.

The entire session is packed with highlights as expected with Sophie. She transforms into various animals almost instantly, finding herself in all kinds of odd positions she can’t explain after snapping back to her normal self. There are a number of freeze scenes, where she’s posed and moved. There’s a great scene where she’s made to think her water is alcohol, becoming so intoxicated she begins to dance. She even experiences an age regression, answering questions as she regresses. The shoot of course ending with the classic pleasurable handshake. But this is only to name a few memorable moments from an incredible hypnosis session.

Full induction into hypnosis and reinduction
She becomes frozen like a statue whenever triggered
She is moved and posed while she remains frozen
She is triggered to say the phrase “I am deeply hypnotized”
She repeats the phrase throughout the entire shoot
Different parts of her body become jelly when touched by hypnotist
Her bra and underwear become itchy when she hears a snap
That itch becomes an enjoyable feeling instead
She becomes mesmerized by a pocket watch and cannot look away
She is brought back under hypnosis by the pocket watch
Her tongue and mouth become numb but she doesn’t notice
Her mouth and tongue feel pleasurable while still numb
She repeats her last two words like a parrot and doesn’t notice
She speaks like various animals but doesn’t notice
She is brought back into trance with several instant inductions
She becomes stiff and rigid when triggered
Her hands become stuck to any surface the hypnotist places them on
She is tickled while her hands are stuck in various positions
She becomes a robot whenever triggered
She refers to the hypnotist as master while a robot
She dances while she remains a robot
Her mind is slowly drained from a spiral
Her mind returns as Stephanie, a cliche airhead
She believes she’s various animals, including a chicken, puppy, and cat
Brought back into trance with an instant induction while she’s a chicken
She believes her water is alcohol and becomes intoxicated
She feels like dancing while still intoxicated
She is hit with the hypno gun several times
She uses the hypno gun on herself a few times
The hypno gun feels good instead
The smell of her feet is mesmerizing but causes her to fall asleep
Her age is slowly regressed by sucking on her thumb
She is asked question as she regresses through different ages
She tries to resist the pocket watch but finds she cannot
She is brought back into a hypnotic state by the pocket watch
She repeats her own trigger while in trance
She experiences the pleasurable handshake to end the shoot 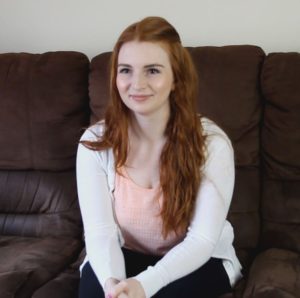