In this hypnosis session we feature one of our best subjects in Jayne, who despite visiting several times before, provided one of our best sessions ever. It’s not only one of our longest and most content filled videos, but it also includes some of the wildest suggestions and requests we’ve used so far.

Since we needed very little time to get Jayne into a deep hypnotic trance, there are a large amount of suggestions in this shoot, and Jayne responded to every single one incredibly well. There are a number of freeze scenes with a lot of posing and close-ups, including some great moments where she’s frozen very slowly. She becomes completely rigid and is lifted into the air. She experiences a number of animal transformations, including an extended scene where her arm becomes a snake that slowly hypnotizes her, turning her into a snake as well. This is only highlighting a few moments among over two hours of incredible reactions.

Full induction and reinduction
She forgets she’s ever been hypnotized
She becomes frozen like a statue whenever triggered
She is moved and posed while she remains frozen
She becomes stuck in a loop, repeating herself when triggered
She still doesn’t believe she’s been hypnotized
She says the phrase “I am deeply hypnotized” when triggered
She doesn’t know why she keeps saying it
She becomes stuck in a loop, repeating the phrase
Her bra and underwear become itchy
Her bra and underwear begin to tickle her
Her bra and underwear bring her pleasure but she tries to hide it
She remembers the session so far
Hypnotized with an instant induction
Becomes frozen slowly from her toes to her head
Her mind is slowly frozen along with her body
She slowly becomes rigid when triggered
She is lifted into the air by the hypnotist and held there while rigid
She snaps to attention and salutes the camera when triggered (head isn’t in shot during salute)
She doesn’t know why she continues to salute.
When triggered to salute she remains completely blank
She marches in front of the couch while blank
She opens her eyes while in trance and begins to dance
She faints or drops into an instant sleep when shot with the hypno gun
She uses the hypno gun on herself several times
She faints or drops into an instant sleep when she thinks of the words knock out
She believes she’s a cat when triggered
She believes she’s a chicken when triggered
She believes she’s a puppy when triggered
She is frozen several times while fixing her make up in the bathroom
She changes into a sexier outfit
She believes she’s a cat again when triggered
She falls in love with a pillow
She finds the pillow gives off a pleasurable feeling
She falls in love with her feet instead, finding they give her the same feeling
She is transformed into a number of animals including a cat, puppy, monkey, fish, and chicken
Her mind is slowly drained into the camera lens when she focuses on it
She follows commands while her mind is blank
Her mind is returned as a new personality, believing she’s an airhead
She dances when she hears music while her personality is altered
Her brain is pulled from her head, leaving her empty minded
It’s returned to her with her normal personality
She becomes a ballerina when triggered
She becomes a robot when triggered
She refers to the hypnotist as master while a robot
She walks in front of the couch with her arms extended as a robot
Her hand becomes a snake that has the ability to hypnotize her
The snake slowly transforms her into a snake as well
She’s occasionally snapped out of it when her hand is held
She sucks her thumb when she hears a snap but doesn’t know why
Tries to stop it but continues each time she is triggered
She is hypnotized and woken up for the last time 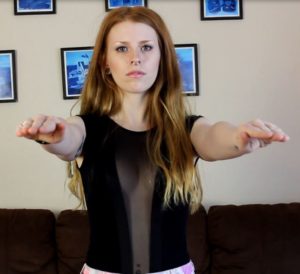 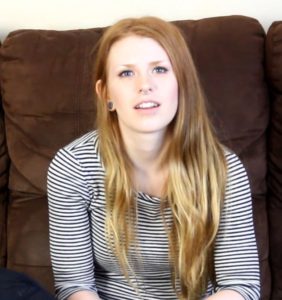